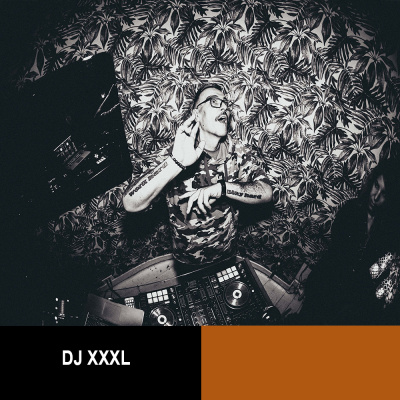 XXXL was born in 1974 in İstanbul. He completed his education in Turkey and USA and had music education under the supervision of Önder Bali through his high school life. In the meantime, he attended to the drum lessons of Salim Ağırbaş. He had been a member of choir and band of Cavusoglu College.

He graduated from Michigan State University with double major in Communication and Marketing. He holds Master's Degree in Consumer Psychology.

On his 13th birthday, XXXL was already a DJ. He played Popular Dance Music, Deep, Vocal, Garage, House, Tech House & Techno in his sets besides Rap. In 2003, with the global rise of R&B and Hip Hop, he found the chance to play and make the music he loved and listened.

XXXL started his radio career as the guest host of Kemal Ayyıldız's program at Kent FM 101. Later, he started working with Ömer Karacan as a program host at Number 1 FM. He promoted to the Production Director of Number 1 FM, Kiss FM, Energy FM and Klas FM. Meanwhile, he acted as the producer of Number 1 Master Mix program. In the due course, he produced many radio jingles for well-know brands i.e. Quicksilver, Tiffany & Tomato and Mavi Jeans. In 1991, he founded Turkey's first Ambiant & Trance Group "Modulation Wave" with Erol Temizel and the Group's first album was released in the same year. Modulation Wave produced many popular remixes. XXXL and Erol Temizel were the creators of Turkish pop star Tarkan's "Sevis Benimle" remix, which was the very first official remix ever produced in Turkish music history in cooperation with Ömer Karacan.

XXXL hosted many TV programs, "MC Hot" on Hot TV being only one of many other examples and also on Number 1 TV with the "DUKE" format, he co-created with the famous director Umur Turagay. He also appeared as host or guest on many other TV channels.

XXXL made vocalizations to the radio and TV spots of Levis, Burger King, Clynomin, Algida, which were produced by Jingle House.
DJ XXXL, worked with Chantage (formed by Kıvanc K, Tolga İnci, Hakan Özer) and Rebel Moves (formed by the crew of the Jingle House) as sound engineer and stage manager.

He was Ege Çubukçu's (Hip Hop artist) stage performing DJ, Stage Manager and Co-producer between 2004-2018. He's been in the Nuké Band project with Sonay Akçen since 2003.

He became resident DJ at;

He also appeared in many other clubs all around Turkey, Europe and USA as R&B and Hip Hop Nights as Main Host DJ and MC.

In 2004, he starred in a TV series named "Lise Defteri", directed by Mustafa Altıoklar, as the music teacher called "Burak" for 33 episodes. He starred in four motion pictures, three TV series and many TV commercials as well.

DJ XXXL's musical goal is to establish an R&B Hip Hop Music Company and to improve this business in Turkey, while establishing a Label that will help our younger candidates.