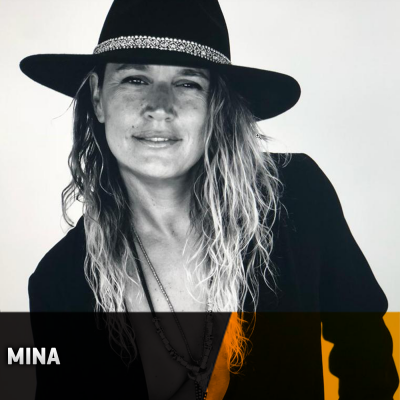 Mina is a DJ from Argentina. She began collecting vinyls at a very young age. Jazz, Bossa Nova, Soul
and some other styles considered the roots of electronic music were among her favorites.
Her career started in 1999, with a monthly residency at Pacha in Buenos Aire
Mina's style goes from the organic downtempo beats all the way to the roots of the Afro House.
This cool sound spectrum is what really turns Mina into an  ecletic DJ., able to draw big crowds like she did
in music festivals such as Creamfields Buenos Aires, Creamfields Uruguay and the Winter Music Conference in
Miami as well, where she performed togeather with the amazing voice of Naked Music :Mrs.Lisa Shaw and joined
house legend Mr.Erik Morillo
Thanks to her...... , Mina was one of the chosen DJ's to take her music to the catwalk at the Buenos Aires
Fashion Week ( xxxx edition)
Her versatility is what really allows Mina to handle either big venues or small ones like she did in cities like Lima,
Santiago de Chile, Asunción and several other cities in Brazil.
In the early 2000's  she had the chance to take her art touring Central America, United States and Europe.
Since she is 19, she lands every summer in Punta Del Este (Uruguay) where she is wellknown by her art and where
her delicate combination of a silky smooth sound, mixed up with a funky twist and a touch of groovy tunes, makes Mina
the ideal option for a sunset at the beach , at  a Bar or at a Private Party.
For the last 10 years, she also has been a resident at the mythical MOVE ON party ,
where she shared  the dj booth with artists like : Mathias Tanzmann, Tania Vulcano, Behrouz, Neverdog
and Victor Calderone.
In Jul 2011 Mina flew to Spain and she choose Ibiza as her home base. From there she tavells wherever
in the world works call.
This challenging move was a turning point in her life, music and the corner stone in her international career.
From Ibiza, she frequently fly o (Flies) to Barcelona and Madrid where she is always welcome and
venues like Café Berlín, Sala Sol, Sala Barco,Makarena and CDLC are raedy to enjoy her music.
Nowadays, in Ibiza she has residency at :
"El Chiringuito", Es Cavallet, at the new "Laylah Ibiza","Izakaya" restaurant at Sir John Hotel,
"The Experimental Beach" on its "No Monday, No cry¨ Sunset session among others Balearic
places that also have her in their DJ's line up.

Radio Shows:
Mina produces and .....a weekly radio Show called ¨Travelling Without Movin¨.which is
on air every Wenesday at 8:00pm on ¨PLAYASOL IBIZA RADIO 92.4¨ or
on line login onto www.playasolibizaradio.fm. Also she has
a Monthly session every first Tuesday of the month on www.fmdelta903.com.

Reaching almost her 20 years in the dj arena Mina has shared the DJ booth with big
names in the international DJ scene such  as Eric Morillo, Lee Burridge,  Steve Lawler, Blond: is,
Amirali, Adriatique, Hernan Cattaneo, Behoruz, Culoe de Song, Da Capo and Claptone among others...